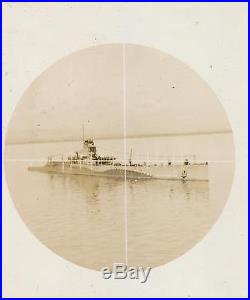 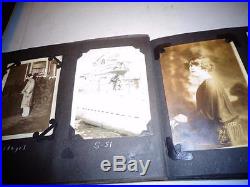 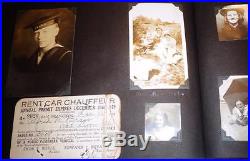 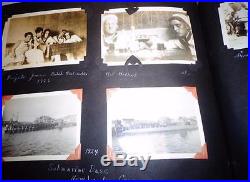 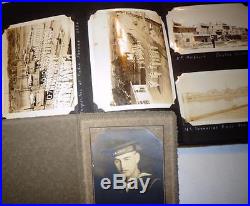 1925 Submarine Photo Album Navy Subs, USS Arizona, Sunken Sub, Carrier Langley. 1925, 1926, 1927 photo album from an early US submariner. Leather bound, 80 pages, probably 130 historical navy related photos. All photos are removable and none are pasted down. Several photos of the S-51 which was sunk and retrieved with large crew loss. Pictures of subs S-10, S-11, S-12, S-13. Pictures of the battleships Arizona, California, Tennessee, West Virginian, Pennsylvania, Colorado, Mississippi, Seattle, Idaho and more before Pearl. Picture of the USS Langley, an early carrier. Photo of the airship Shenendoah. Photos of loading torpedoes and a scarce photo of S-12 through the periscope of S-13. I have never had one like it before. Virtually everything is named and annotated including the subs, ships, and all the personnel. The named admiral is H. Lots of the shots are from New London, many from West Coast and San Francisco. Last 10-15 pages are the sailor after discharge as a cab driver and truck driver in San Francisco. Includes his id from the cab company with his photo on reverse. Included is another smaller album of about 30 pages with mostly his girlfriends and family pictures from the 20’s. There is one photo of the damaged S-51 in it however. Auctiva Offers Free Image Hosting and Editing. Auctiva gets you noticed! Track Page Views With. Auctiva’s FREE Counter. The item “1925 Submarine Photo Album Navy Subs, USS Arizona, Sunken Sub, Carrier Langley” is in sale since Sunday, June 11, 2017. This item is in the category “Collectibles\Militaria\1919-38\Original Period Items”. The seller is “sanford46″ and is located in Henderson, Nevada. This item can be shipped worldwide.