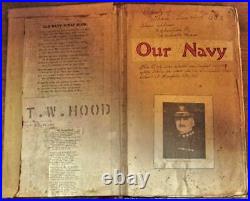 That old Navy scrapbook of mine, / It’s crammed full of pictures and happenings of old, / Of the days that are now left behind. An extensive sailor’s archive (a huge scrapbook, hundreds of photographs, and five oral history cassette tapes) documenting his pre-WWII service on the flagship of the U. Compiled by Thomas Wallace Hood while on the. This archive consists of. An 8″ x 14″ 300-page scrapbook, filled with articles, clippings, photographs, cartoons, newsletters, assorted ephemera. Hood used 86 pages in the rear of the album to keep a daily journal. The archive also includes more than 100 loose photographs and Another 20 loose documents, letters, certificates, and membership cards, as well as Five 90-minute cassette tapes in which Hood provides an oral history of his naval service. The paper items in the archive are in nice shape. Although the tapes look okay, I cannot verify whether they play or not as I haven’t had a cassette player in years. In addition to commentary about daily shipboard life and duty as machinist’s mate, it includes many other lively observations events and happenings during his time on-board. Speed, speed, speed, all the time. Thirty one knots and no smoke. Dropped a depth bomb and then. Picked up dead fish. Fired the torpedoes and raised Hell. We put out 14 shells on the #4 gun, 82 on #3 all star shells, and 32 small star shells on #5 anti aircraft gun. Fired a torpedo, also. What a surprise I was appointed to mess cooking. Three months of washing dishes and peeling spuds. ” Subsequently, for days, Hood “peeled spuds. Lost a man overboard. Sharks got him, I guess. Every body is getting them some kind of preparation for the Southern cruise. Going to the fights tonight.. A typhoon is just ahead of us. Got woke up about 3:30 this morning, drenched to the hide. Walked around all day. I like it very much. The people are polite and clean and they will do anything for an American gob. Proceeded up the Yangtze River. Very pretty scenery coming up the river and there are English, Japanese and Chinese men-o-war here in Yanking. Well, I can say I’ve been ashore in Shanghai [and] Tsing-Tao. Made the rounds of the cabarets and did some dancing. Also drank a few. Went to the’Marine’s Café’. Lots of Russians here. Made the cabarets again. The girls all in native costume. The Exec says no more liberty until further notice, as a couple of fellows made an ass of themselves [in Chefoo]. Underway at daylight for. Hainan just off the French-Indo-China coast, to protect the American interests and missionaries. During the 1920s-1930s, Hainan was a hotbed of early Communist Chinese activity. This place is held by the rebel army now and the Nationalists are trying to take it over. The battle of Haihow was fought today and the town was taken over by the Nationalists. Not a shot fired in the town. There are over 100 loose photos showing shipmates (casual and posed images in various uniforms; including a Filipino mess steward and laundryman), recreation (soccer team and race-boat), equator ceremony with Davy Jones, Neptunus Rex, etc. , the bridge, running torpedoes, an officer’s gig, and bum boats. About 45 show sailors on liberty in Bali, Borneo, Ceylon, China, French Indo-China, Java, Philippines, Singapore, Sumatra, Thailand, Villafranca, Naples, and Pompeii. Documents within the archive include Hood’s Birth Certificate, his 1927 Discharge, a Statement of Service from 1938, a post-WWII certificate recognizing his service in the Office of Scientific Research and Development, a post-WWII discharge certificate as a Sergeant in the Massachusetts National Guard, and a 1992 Certification of Military Service. The ephemera includes membership cards in the Ancient Order of the Deep and Domain of Neptunus Rex, a coupon for the Osaka Bazar, a drink/dance ticket for the Japanese Bar Tokyo, advertisements for a tailor in Shanghai and a silk and curio dealer in Colombo, an invitation for a dance aboard the U. Macleish, a Luncheon menu for the Adelphi Hotel in Shanghai, and a U. Pittsburg “Happy Hour” program in honor of Governor Davis. One of the best between-the-wars U. Navy archives that we have handled #9726. View My Other Items For Sale. I know that this can be expensive, but I’ve switched to this method because I’ve had too many claims of non-receipt by international buyers. Please don’t assume anything that is not specifically stated or shown on this listing page. This is a Read’Em Again Books & Paper sale. In addition to a nice selection of Americana, diaries, journals, photograph albums, other unique personal narratives, and postal history, we often have a small stock of children’s books, illustrated books, and unusual non-fiction as well as ephemera, prints, sheet music, maps, postcards, and antique toys & games. Read’Em Again Books & Paper is a member of the Antiquarian Booksellers Association of America (ABAA), the International League of Antiquarian Booksellers (ILAB), the American Stamp Dealers Association (ASDA), the National Stamp Dealers Association (NSDA), the Ephemera Society, the Manuscript Society, the American Philatelic Society (APS), the U. Philatelic Classics Society, and the Military Postal History Society. We think that you’ll find our prices to be very competitive with other internet book and paper sellers. Auctiva offers Free Image Hosting and Editing. Auctiva gets you noticed! This item is in the category “Collectibles\Militaria\1919-38\Original Period Items”. The seller is “ksanftleben” and is located in this country: US. This item can be shipped to United States.