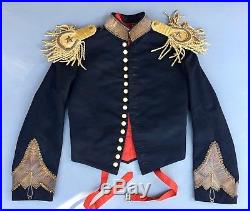 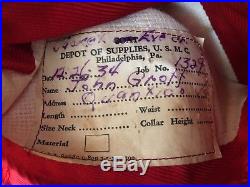 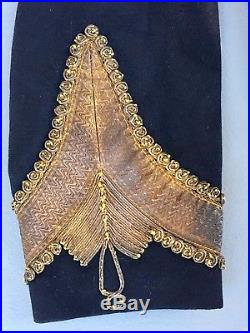 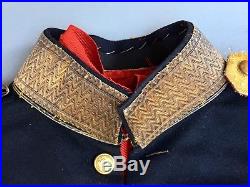 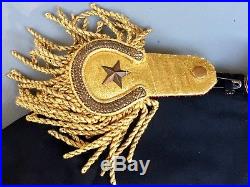 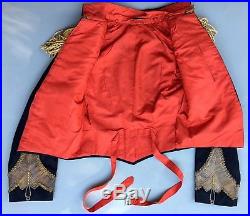 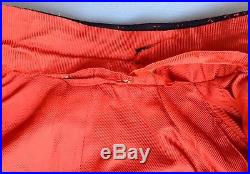 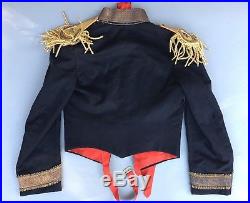 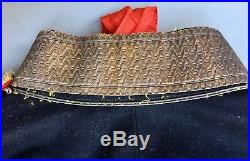 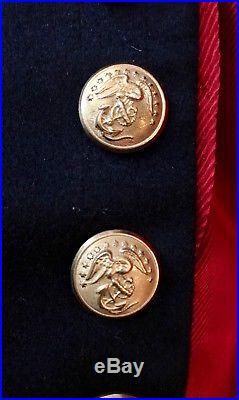 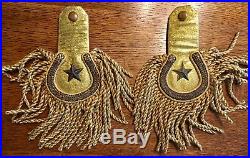 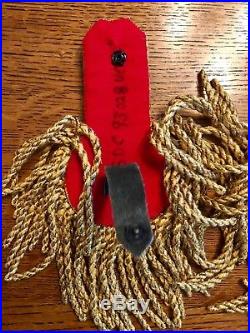 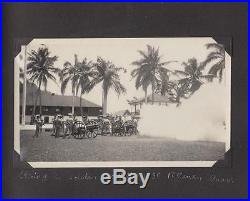 Marine’s Pre-World War Two Photo Album from Guam – Circa 1930. There are additional images after the description. Photograph album documenting a Marines life while stationed in pre-World War II Guam. This 5.5 x 8 album contains over 40 pages filled with approximately 160 photographs ranging in size from 2 x 3 to 3.5 to 5.75. All of the photographs are attached with mounting corners. Most are captioned on the page in white ink which is faint but legible. The front of the album features a somewhat faded gilt Eagle, Globe, and Anchor (EGA) logo with U. The photographs, pages, and album are all in nice shape. The Guam images include. Apra Harbor, and other scenes of Guam including beaches, thatch buildings, water buffalo, an outrigger canoe, and a rare snowstorm. Commercial and military vessels including the Asiatic Fleet. Marines parades, individuals, etc. And Marine facilities barracks, tent camps, etc. An identified Marine driving an official staff car with an EGA logo on the door. Marine aircraft in flight They appear to be Curtis HS-2L Flying Boats and a Curtis SOC-1 Observation Seaplane. A Marine artillery battery firing a celebratory salute for Memorial Day, 1930, and using the same guns during beachfront training The appear to be French-made Model 1897 75 mm Model 1897 field guns. A bivouac and convoy with trucks and a 10-Ton Artillery Tractor, and more. A scarce and very nice visual record of U. Marine Corps life in the Pacific in the years between the World Wars. View My Other Items For Sale. I know that this can be expensive, but I’ve switched to this method because I’ve had too many claims of non-receipt by international buyers. Please don’t assume anything that is not specifically stated or shown on this listing page. This is a Read’Em Again Books sale. Read’Em Again books is a member of the Antiquarian Booksellers Association of America (ABAA), the International League of Antiquarian Booksellers (ILAB), the Ephemera Society, the Manuscript Society, the American Philatelic Society (APS), the U. Philatelic Classics Society, and the Military Postal History Society (MPHS). We think that you’ll find our prices to be very competitive with other internet book sellers. In addition to a nice selection of Americana, diaries, journals, photograph albums, and other unique personal narratives, we also maintain a small stock of children’s books, illustrated books, unusual non-fiction as well as ephemera, philatelic items, prints, sheet music, maps, and occassionally postcards, antique toys & games, tobacciana, and breweriana. Get Supersized Images & Free Image Hosting. Create your brand with Auctiva’s. The item “Marine’s Pre-World War Two Photo Album from Guam Circa 1930″ is in sale since Thursday, June 29, 2017. This item is in the category “Collectibles\Photographic Images\Vintage & Antique (Pre-1940)\Photo Albums”. The seller is “ksanftleben” and is located in Dumfries, Virginia. This item can be shipped to United States, Canada, United Kingdom, Denmark, Romania, Slovakia, Czech republic, Finland, Hungary, Latvia, Lithuania, Malta, Estonia, Australia, Greece, Portugal, Cyprus, Slovenia, Japan, China, Sweden, Indonesia, Taiwan, South africa, Thailand, Belgium, France, Hong Kong, Ireland, Netherlands, Poland, Spain, Italy, Germany, Austria, Russian federation, Israel, Mexico, New Zealand, Singapore, United arab emirates, Qatar, Kuwait, Bahrain.