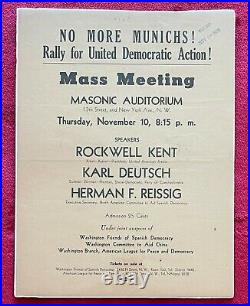 We are offering a RARE flyer – No More Munichs! Rally for United Democratic Action. Mass Meeting held at the Masonic Auditorium, New York. Featuring speakers Rockwell Kent, artist, author, and member of Socialist Party of America, Karl Deutsch, Sudetan German – Member of Social-Democratic Party of Czechoslovakia, and Herman F. Reissig, author and Secretary of North American Committee to Aid Spanish Democracy. Flyer measures 9″ x 12″, and is on a shrink-wrapped acid-free board. Refers to the reaction to the Munich Agreement, signed on September 30,1938, by Hitler, British Prime Minister Chamberlain, French Prime Minister Daladier, and Italian dictator Mussolini, that permitted German annexation of the Sudetenland in Western Czechoslovakia. Hitler, who already had some German troops in Czechoslovakia, wanted to complete German occupation of the Sudetenland. Hitler’s plan was to stir up civil agitation in Czechoslovaki, thereby giving him a reason to attack. Czechoslovakia, having little to no support from allied countries in Europe who did not want to participate in another war, would have to go it alone. Rather than fight the Germans, they decided to submit the Hitler’s demands and hand over Sudetenland to him. Although war was temporarily avoided, Hitler expanded his occupation, annexing the remainder of Czechoslovakia in March of 1939, and WWII began with his invasion of Poland the following September. The “Munich Agreement” became the example that embodied how futile it was to believe that totalitarian states could be appeased by giving in to their demands thinking they would be satisfied with a little, when their plan was endless expansion, which would inevitably lead to war. The item “ROCKWELL KENT 1938 NO MORE MUNICHS! RALLY FOR UNITED DEMOCRATIC ACTION RARE” is in sale since Sunday, July 25, 2021. This item is in the category “Collectibles\Historical Memorabilia\Political\Rest of the World\Europe”. The seller is “propicker” and is located in Santa Clarita, California. This item can be shipped worldwide.