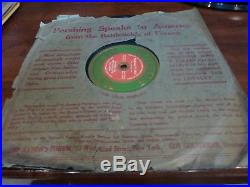 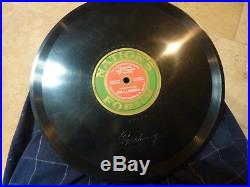 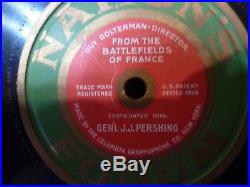 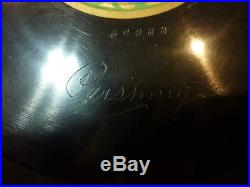 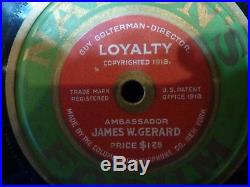 It has Pershing’s autograph etched in the shellac but, in my opinion, the historical significance of this WWI recording is the speech on the other side by Ambassador James W. Gerard where he warns those German-Americans who are enemy sympathizers that they might be hung from America’s lamposts. Definitely VERY politically incorrect. Record in very good condition. Here is full content of Ambassador Gerard’s recorded speech. I know that it is hard for Americans to realize the magnitude of the war in which we are involved. We have problems in this war no other nations have. Fortunately, the great majority of American citizens of German descent have, in this great crisis of our history, shown themselves splendidly loyal to our flag. Everyone had a right to sympathize with any warring nation. But now that we are in the war there are only two sides, and the time has come when every citizen must declare himself American – or traitor! We must disappoint the Germans who have always believed that the German-Americans here would risk their property, their children’s future, and their own neck, and take up arms for the Kaiser. The Foreign Minister of Germany once said to me your country does not dare do anything against Germany, because we have in your country 500,000 German reservists who will rise in arms against your government if you dare to make a move against Germany. Well, I told him that that might be so, but that we had 500,001 lamp posts in this country, and that that was where the reservists would be hanging the day after they tried to rise. And if there are any German-Americans here who are so ungrateful for all the benefits they have received that they are still for the Kaiser, there is only one thing to do with them. I have travelled this year over all the United States. Through the Alleghenies, the White Mountains, and the Catskills, the Rockies and the Bitterroot Mountains, the Cascades, the Coast Range, and the Sierras. And in all these mountains, there is no animal that bites and kicks and squeals and scratches, that would bite and squeal and scratch equal to a fat German-American, if you commenced to tie him up and told him that he was on his way back to the Kaiser. The item “GEN’L J. J. PERSHING recording from the Battlefields of France withOrig Sleeve WWI” is in sale since Saturday, September 22, 2018. This item is in the category “Collectibles\Historical Memorabilia\Political\US\Other US Politics Collectibles”. The seller is “phonobob2″ and is located in Scottsdale, Arizona. This item can be shipped to United States, Canada, United Kingdom, Denmark, Romania, Slovakia, Bulgaria, Czech republic, Finland, Hungary, Latvia, Lithuania, Malta, Estonia, Australia, Greece, Portugal, Cyprus, Slovenia, Japan, China, Sweden, South Korea, Indonesia, Taiwan, Thailand, Belgium, France, Hong Kong, Ireland, Netherlands, Poland, Spain, Italy, Germany, Austria, Bahamas, Israel, Mexico, New Zealand, Philippines, Singapore, Switzerland, Norway, Saudi arabia, United arab emirates, Qatar, Kuwait, Bahrain, Croatia, Malaysia, Chile, Colombia, Costa rica, Dominican republic, Panama, Trinidad and tobago, Guatemala, El salvador, Honduras, Jamaica.