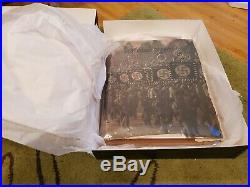 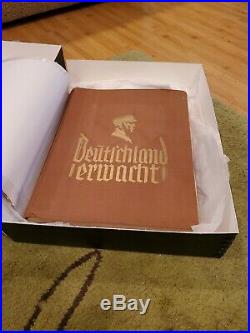 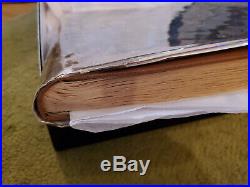 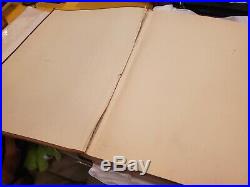 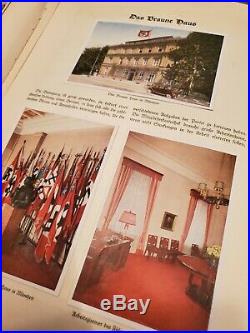 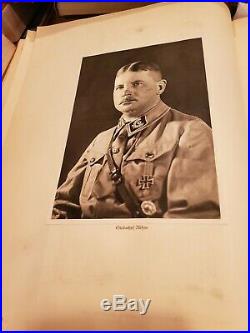 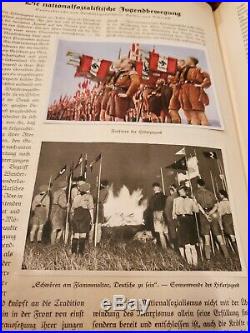 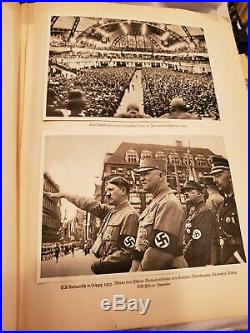 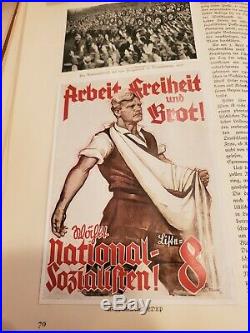 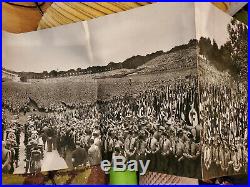 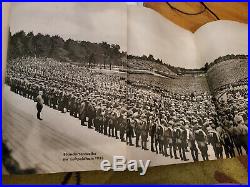 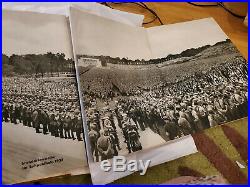 Deutschland Erwacht 1933: 101-200 Print Run! This is a rare, early Third Reich book containing dozens of original period photos in color. This was the first very high quality publishing effort of the Nazi Party in 1933. This huge 9-5/8 x 12-3/8 inch, 150+ page hard cover cigarette card album, Deutschland Erwacht (Germany Awakened), was published for the NSDAP in Germany by Cigaretten Bildendienst of Altona-Bahrenfeld in 1933. The book consists of German text, six full-page illustrations in color and black & white, over 60 color photos pasted in (most 1/2-page size), over 160 black & white photos pasted in, and one huge fold-out photo taken at a Nazi Party rally in Nürnberg that measures 12 inches tall by over 4 FEET long! The brown cloth cover is embossed with gold blocking of the title and the profile of a Nazi against an embossed swastika in an oak leaf wreath. The book covers every conceivable aspect of Adolf Hitler and his Nazi Party including major personalities, early meetings, the Beer Hall Putsch, electioneering, the Braunes Haus, fighting the Communists, the SA and SS, the Hitler Youth (HJ), BdM, Party Rallies, winning power in Germany, Hitler at the Berghof and at Mad Ludwig’s castle Neuschwanstein, etc. Photos include Hitler, Stabschef der SA Viktor Lutze , Deputy Führer Rudolf Hess, Reichsminister Hermann Göring, Reichsführer-SS Heinrich Himmler, Julius Schreck, Dr. Joseph Goebbels, Horst Wessel, Jakob Grimminger and the Blood Flag (Blutfahne), HJ Leader Baldur von Schirach and Julius Streicher in Nürnberg, the Italian Avantguardia, Ritter von Epp, all the Putsch martyrs, Stosstruppe Hitler, Hitler’s birth house in Braunau, the first office of the NSDAP, the first Reichsparteitag in München in 1923, Deutscher Tag in Nürnberg in 1923, rows of Deutschland Erwache standards, Reinhard Heydrich, SS-General Joseph “Sepp” Dietrich, the beginning of the Reichautobahn, etc. This color copy (from the 101 – 200 print run) of Deutschland Erwacht has the full-page portrait of Ernst Röhm which was later replaced with Stabchef der SA Viktor Lutze after the Night of the Long Knives in June 1934 (page 52). Please see the photos of this book which have shadows from me trying to take them, I can provide more. The cover is present and wrapped in an archival jacket. The book has been stored in an archival box with archival tissue. There is a slight musty odor. Other damage is pictured. A great color example of an early version of this cigarette album. The item “Deutschland Erwacht Nazi Cigarette Album Color Complete 1933″ is in sale since Saturday, July 20, 2019. This item is in the category “Collectibles\Militaria\WW II (1939-45)\Original Period Items\Germany\Books”. The seller is “mayablake” and is located in Irving, Texas. This item can be shipped to United States.