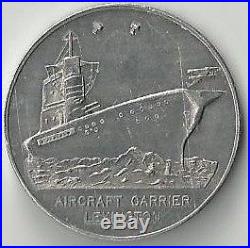 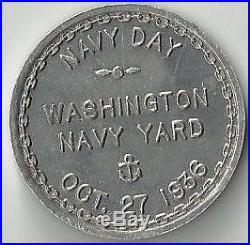 Condition: Circulated, and in good shape. Has light surface maarks from hanlding, and manufacturing process. This token is 1 1/4 inches in diameter. Made of a light white medal material. USS Lexington (CV-2) , nicknamed “Lady Lex”. Was an early aircraft carrier built for the United States Navy. Originally designed as a battlecruiser, she was converted into one of the Navy’s first aircraft carriers during construction to comply with the terms of the Washington Naval Treaty of 1922, which essentially terminated all new battleship and battlecruiser construction. Lexington and Saratoga were used to develop and refine carrier tactics in a series of annual exercises before World War II. She also delivered medical personnel and relief supplies to Managua, Nicaragua, after an earthquake in 1931. Lexington was at sea when the Pacific War began on 7 December 1941, ferrying fighter aircraft to Midway Island. After a few days, she was sent to create a diversion from the force en route to relieve the besieged Wake Island garrison by attacking Japanese installations in the Marshall Islands. The island was forced to surrender before the relief force got close enough, and the mission was cancelled. A planned attack on Wake Island in January 1942 had to be cancelled when a submarine sank the oiler required to supply the fuel for the return trip. Lexington was sent to the Coral Sea the following month to block any Japanese advances into the area. Lexington was briefly refitted in Pearl Harbor at the end of the month and rendezvoused with Yorktown in the Coral Sea in early May. A few days later the Japanese began Operation MO, the invasion of Port Moresby, Papua New Guinea, and the two American carriers attempted to stop the invasion forces. They sank the light aircraft carrier Shh on 7 May during the Battle of the Coral Sea, but did not encounter the main Japanese force of the carriers Shkaku and Zuikaku until the next day. Aircraft from Lexington and Yorktown succeeded in badly damaging Shkaku , but the Japanese aircraft crippled Lexington. Vapors from leaking aviation gasoline tanks sparked a series of explosions and fires that could not be controlled, and the carrier had to be scuttled by an American destroyer during the evening of 8 May to prevent her capture. To view miscellaneous challenge coins. NOTE: Never personally given any of the coins. All coins are guaranteed to be in excellent condition unless otherwise specified above. The free listing tool. The item “USS Lexington CV-2 Aircraft Carrier 1936 Navy Token” is in sale since Sunday, November 18, 2012. This item is in the category “Collectibles\Militaria\1919-38\Original Period Items”. The seller is “rolyat11″ and is located in Panama City, Florida. This item can be shipped worldwide.