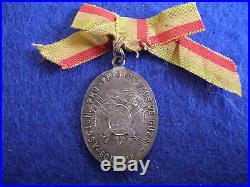 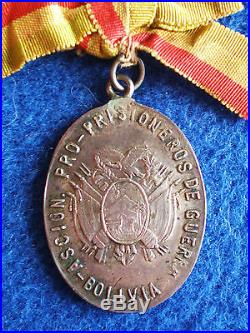 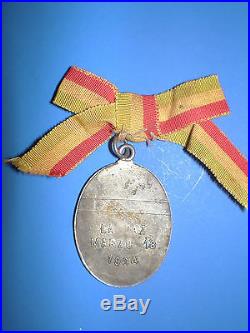 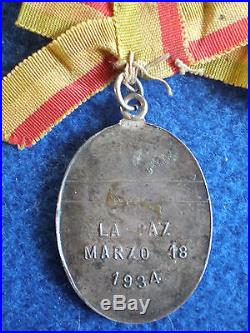 Medal of the Association for Prisoners of War 1934. Very rare silver medal (22 mm x 29 mm) issued by the Bolivian Association for Prisoners of War in. 18 March 1934 not listed in Ross. This is very likely an unofficial medal, but it is clear that this medal was issued in support of Bolivian POWs captured in the Chaco War with. The medal is in extremely fine condition, but it does have a couple of minor defects that resulted when it was die-struck: at the 12 oclock obverse position the letters SI (PRISIONEROS) were poorly struck, and at the 5 oclock obverse position the letters RA (GUERRA) were poorly struck. The medal is on what must be the original red/yellow/ green bow ribbon. This is one of the rarest medals from the Chaco War, a bitter conflict fought in an extremely inhospitable terrain. This can be expensive, but is necessary due to the unreliability of other postal systems. The item “Bolivia Medal of the Association for Prisoners of War 1934 (Chaco War)” is in sale since Wednesday, March 08, 2017. This item is in the category “Collectibles\Militaria\1919-38\Original Period Items”. The seller is “4906504” and is located in Kansas City, Missouri. This item can be shipped worldwide.