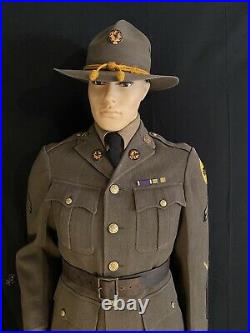 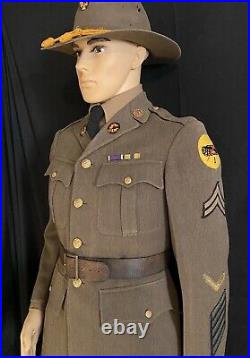 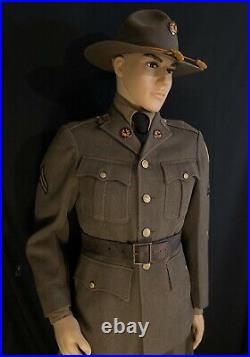 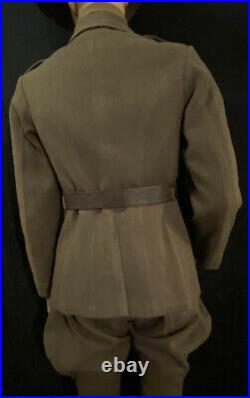 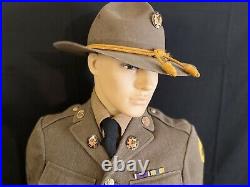 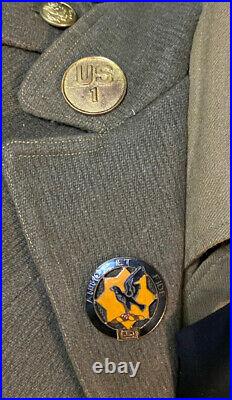 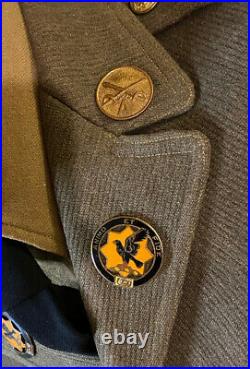 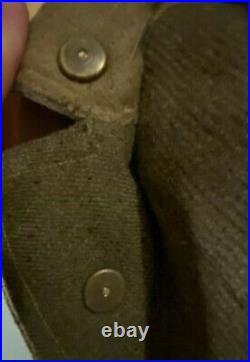 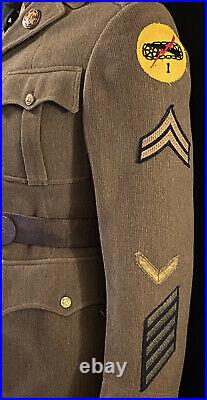 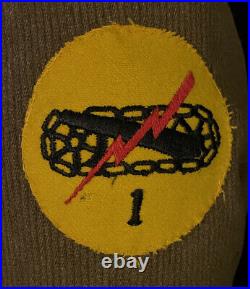 Pre WWII M1926 Spec 8-31A NCO Service Uniform 1st Cavalry Regt (Mechanized) 1935. This uniform was owned by a Cpl of the 1st Cavalry Regt, 7th Cavalry Brigade (Mechanized). This is a very rare find in that the uniform is completely corduroy. I have see this with WWI Army Breeches but I have never seen a tunic like this. It follows the M1926 Spec 8-31A EM Service Uniform in that it’s closer to a Melton Wool then the later revision of 1933 with the Spec 8-31B. This uniform dates between 1930 and 1933. The M1912 Garrison Belt is dated 1935. This uniform grouping includes. M1911 Service Hat, OD Wool Felt; Campaign. M1921 1st Cavalry Regt DI x 2; Screwback. M1921 1st Cavalry Regt DI; Pinback. Type II Collar Disk; 1st Regiment screwback. Type II Collar Disk; “A” Troop, Cavalry screwback. Purple Heart ribbon. Mexican Campaign ribbon. Campaign Cord; Cavalry Yellow (sewn on Campaign hat per Army Regulation). BOOTS, SHIRT, TIE; NOT INCLUDED. There is mothing on the back side of the “Montana” Hat. There is a repaired portion of torn material on the lower inside of the coat. This being said, this is a TRUE museum piece for the United States first modern Armored Cavalry Regiment. The 1st Cavalry Regiment set the stage for our Modern Tank force. The 1st Cavalry Regt, 7th Cavalry BDE Patch is made of a Twill Wool and is definitely a circa 1933 piece. This Corporal uniform shows involvement in WWI with a 6mn bullion overseas Chevron. It also shows that he had served 15 years by the time of this uniform. The Chevrons and service stripes are of the chain stitch type indicating that this was a dress uniform instead of a field piece. This uniform is a beautiful and completely rare piece made of corduroy. You may never see another like it. Unfortunately, it’s not identified. HISTORY OF 1st REGIMENT OF DRAGOONS. The 1st Cavalry Regiment is a United States Army regiment that has its antecedents in the early 19th century in the formation of the United States Regiment of Dragoons. To this day, the unit’s special designation is “First Regiment of Dragoons”. While they were the First Regiment of Dragoons another unit designated the 1st Cavalry Regiment was formed in 1855 and in 1861 was re-designated as the 4th Cavalry Regiment (units were renumbered based on seniority and it was the fourth oldest mounted regiment in active service). The First Dragoons became the 1st Cavalry Regiment since they were the oldest mounted regiment. SPANISH AMERICAN WAR through INTERWAR PERIOD. On 19 June 1899, the 1st Cavalry left Ft Robinson for Fort D. Russell, Wyoming and began thorough training for new recruits after a brief reorganization period. When the Boxer Rebellion began in China in August 1899, the US Army garrison in the Philippines was moved to Peking to relieve the surrounded legations there, and the 1st Cavalry was sent to the Philippines on 7 August, their horses following four days later. Arriving at Batangas, Luzon on 20 September, they moved to Santo Tomas just south of Manila. They busied themselves with scouting missions, escorting supplies, and patrolling the countryside and villages for guerrilla fighters. In October 1901, a group of insurgents stole some native supplies, so 20 troopers pursued them, reclaimed the goods, and burned the village they were found in, and on 22 October, Troop B captured 5 guerrillas on Mount Makiling. From 18 November-1 December, 35 troopers from the 1st Cavalry took part in the Mount San Cristobal Expedition, which destroyed an enemy supply cache. On 15 March 1902, Troop B killed 5 insurgents on Mount Makiling, and killed 4 more on 19 March. On 16 April, the leader of these guerrillas, General Malvar, surrendered, and hostilities ceased. The 1st Cavalry Regiment was sent back home, and arrived at their new post, Fort Clark, Texas, on 1 October 1903, where they remained for three years. After the 1906 San Francisco earthquake, 1st Cavalry troopers moved there to assist, and Troop B remained in San Francisco until 9 June 1907 before returning to Texas. A, B, D, and K Troops were stationed at the Presidio of San Francisco and later joined the rest of their regiment at the Presidio of Monterey until 1 August 1914. Moving to Southern California, the 1st Cavalry garrisoned San Ysidro in response to growing tensions south of the border in Mexico. On 24 August 1915, the regiment moved to Calexico, California to strengthen the border and defend against raids by the bandito, Pancho Villa. They remained guarding the border while General Pershing launched the Punitive Expedition and were still there when the US entered World War I. The 1st Cavalry did not participate in the First World War, but it remained guarding the border until 19 January 1923, when they went to Fort D. This was their last posting as horse cavalry, and during a parade on 14 December 1932, the troopers dismounted and passed in review, saluting their horses as they left them to become a mechanized unit. Moving to Fort Knox, Kentucky, the 1st Cavalry Regiment became the first mechanized unit in the United States Army, and was brigaded with the 13th Cavalry Regiment to form the 7th Cavalry Brigade (Mecz). In the summer of 1939, 7th Cavalry Brigade (Mecz) took part in the Plattsburgh Maneuvers and helped develop the Army’s first tactics for mechanized warfare. In the summer of 1940, the Louisiana Maneuvers convinced the Army of the need to form an armored force and the 1st Armored Division was founded on 15 July 1940. The 1st Cavalry Regiment was redesignated the 1st Armored Regiment that same day, and was assigned to the 1st Armored Brigade. It wouldn’t be long until America’s fledgling armored force would be tested in battle. The item “Pre WWII M1926 Spec 8-31A NCO Service Uniform 1st Cavalry Regt (Mecz) 1933″ is in sale since Wednesday, October 20, 2021. This item is in the category “Collectibles\Militaria\1919-38\Original Period Items”. The seller is “littlebelleblue” and is located in Chesnee, South Carolina. This item can be shipped to United States.