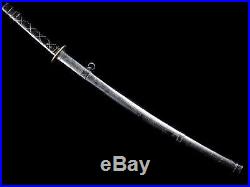 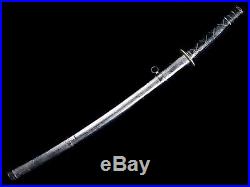 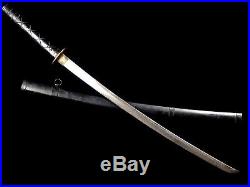 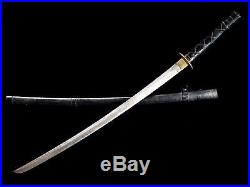 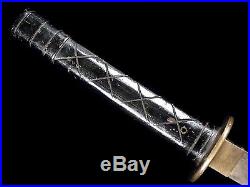 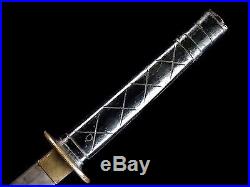 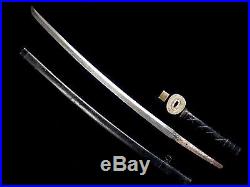 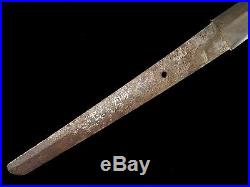 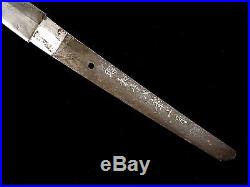 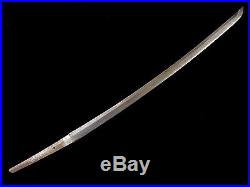 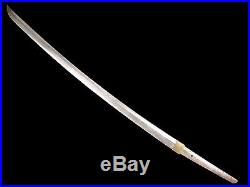 As World War II was coming to a close, the need of Swords for the Japanese Army still existed however, due to the lack of time as well as materials, swords increasingly became more crudely made in the attempt to meet the urgent need. This particular Sword is a very Late War “Last Ditch Effort” and is a very nice and rare example from this period as evidenced by the very simple wood and iron fittings. It is mounted with an arsenal War-Time blade that measures 26 1/8 inches in length which has survived in very nice condition with only some minor surface staining. The tang is signed with two characters that translates to ” TAKA MASA ” as well as is dated “Sho Wa Ju Hachi Nen Ni Gastu” which translates to “February 1943″. The hilt is wooden with a simple carved checkered design to resemble the Officer’s pattern. It is mounted with an equally simple brass tsuba and wooden scabbard that also features simple iron fittings, all remaining exceptionally nice in their condition. Overall measuring 38 7/8 inches in length. Truly a very nice, rare example for any advanced collector. Be sure to add me to your favorites list. Check out my other items. The item “VERY NICE RARE LATE WAR LAST DITCH JAPANESE ARMY NCO SWORD” is in sale since Monday, March 20, 2017. This item is in the category “Collectibles\Militaria\1919-38\Original Period Items”. The seller is “pcay” and is located in Oklahoma City, Oklahoma. This item can be shipped worldwide.