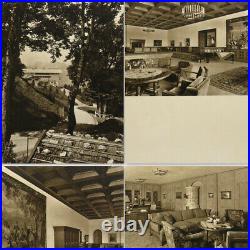 A very rare photo documentary book about the Obersalzberg, the Berghof and surroundings. Good exterior and good interior. With the rare Original Dust Jacket included which is lightly soiled and rubbed. Front free endpaper cut out, name and ex-libris on title page, otherwise ok with mild traces of use and age. Approx/Measurements: 10-1/2″ x 7-1/2″ 0.7 lbs. Published by Time History w/ photo contributions by H. The Berghof was Adolf Hitler’s home in the Obersalzberg of the Bavarian Alps near Berchtesgaden, Germany. The Berghof was developed in stages from a much smaller house, named “Haus Wachenfeld”. “Haus Wachenfeld” was a vacation home built by a businessman from Buxtehude, Otto Winter. Winter’s widow originally rented the house to Hitler for 100 reichsmarks in 1928. The site is breathtakingly scenic. The valley below appears by illusion to be a lake almost at one’s feet. It was located lower down the same mountain as the Kehlsteinhaus, or Eagles Nest, which Hitler rarely visited due to his fear of heights. A large complex of mountain homes for the Nazi leadership (along with many buildings for their security and support staff) was constructed nearby. The Berghof’s great room featured a picture window which could be lowered into the wall below, opening the space to the outdoors and sweeping mountain view. Hitler considered the Berghof his home. He and Eva Braun spent much time there during the 1930s and his last known visit was in July 1944. Severe damage was inflicted on the Berghof during an RAF bombing raid on April 25, 1945. The Berghof was set on fire on May 4, 1945 by retreating SS guards as the Allies approached and the contents were reportedly looted by Allied soldiers and officers. The Berghof was connected to the Platterhof Hotel by a series of complex bunkers deep in the mountain, a superb example of underground engineering built at great speed and powered by a subterranean engine like the one remaining at the Eagle’s Nest. The government of Bavaria gradually destroyed or buried almost every trace of the Berghof and the site is now overgrown with evergreen trees. The Hotel Platterhof, where many Nazi officers stayed while visiting Hitler, has also been destroyed. Some of the underground structures can be toured from the new German Documentation Center as well as the old Zum Türken Hotel which borders the complex of ruins. By 2005 Berchtesgaden, with its spectacular scenery, had been largely redeveloped for the tourist industry. This item is in the category “Collectibles\Militaria\1919-38\Original Period Items”. The seller is “fichtenbau” and is located in this country: DE. This item can be shipped to North, South, or Latin America, all countries in continental Asia, United Kingdom, Australia.