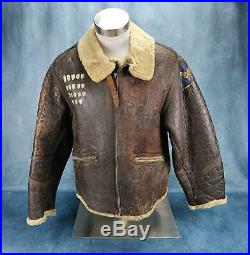 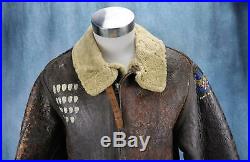 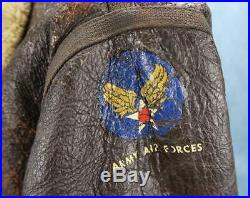 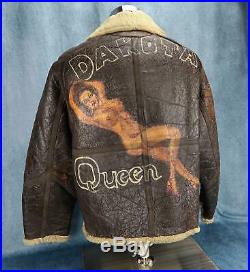 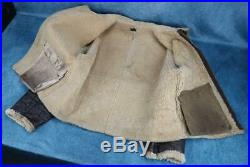 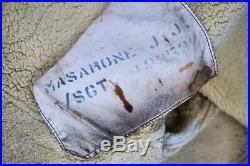 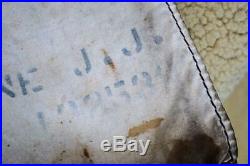 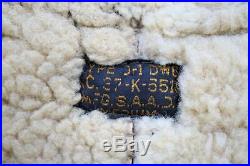 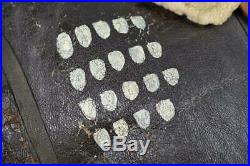 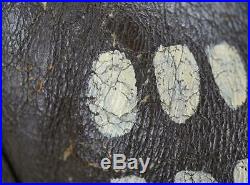 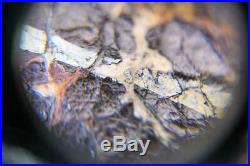 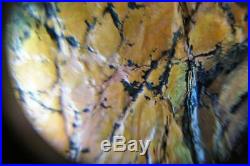 WW2 officer US Army Air Force Corp leather D1 bomber jacket USAF DAKOTA QUEEN. Another original item from. Here is your chance to own an incredible D1 bomber jacket from the European Theater of Operations and from within a very famous unit. The jacket is named on the underside of the interior pocket and has not been researched. D1’s were typically preferred by ground crew personnel. The individual bombs painted on the jacket as well as the text were done with a brush and I have taken a loupe to show the legitimacy of this paint. The woman pinup figure was done in airbrush and I have shown the details of this work as well. One exterior pocket zipper was period replaced. The jacket is hard worn but a desirable size and has the most impressive imagery. A great looking D-1 in good overall condition and ready for your collection. A few interesting excerpts from some Online research. On McGovern’s December 15 mission over Linz, his second as pilot, a piece of shrapnel from flak came through the windshield and missed fatally wounding him by only a few inches. [46] The following day on a mission to Brüx, he nearly collided with another bomber during close-formation flying in complete cloud cover. [47] The following day, he was recommended for a medal after surviving a blown wheel on the always-dangerous B-24 take-off, completing a mission over Germany, and then landing without further damage to the plane. [48] On a December 20 mission against the koda Works at Pilsen, Czechoslovakia, McGovern’s plane had one engine out and another in flames after being hit by flak. Unable to return to Italy, McGovern flew to a British airfield on Vis, a small island in the Adriatic Sea off the Yugoslav coast that was controlled by Josip Broz Tito’s Partisans. The short field, normally used by small fighter planes, was so unforgiving to four-engined aircraft that many of the bomber crews who tried to make emergency landings there perished. But McGovern successfully landed, saving his crew, a feat for which he was awarded the Distinguished Flying Cross. On March 14 McGovern had an incident over Austria in which he accidentally bombed a family farmhouse when a jammed bomb inadvertently released above the structure and destroyed it, an event that haunted McGovern. [54] Four decades later, after a McGovern public appearance in that country, the owner of the farm approached the media to let the senator know that he was the victim of that incident but that no one had been hurt and the farmer felt that it had been worth the price if that event helped achieve the defeat of Nazi Germany in some small way. McGovern was greatly relieved. April 25 saw McGovern’s 35th mission, which marked fulfillment of the Fifteenth Air Force’s requirement for a combat tour, against heavily defended Linz. The sky turned black and red with flak McGovern later said, “Hell can’t be any worse than that” and the Dakota Queen was hit multiple times, resulting in 110 holes in its fuselage and wings and an inoperative hydraulic system. McGovern’s waist gunner was injured, and his flight engineer was so unnerved by his experience that he would subsequently be hospitalized with battle fatigue, but McGovern managed to bring back the plane safely with the assistance of an improvised landing technique. I never grade my items as mint, even though may be. If for any reason you require additional photos, please do not hesitate to ask. View My Other Items For Sale. Auctiva offers Free Image Hosting and Editing. Auctiva gets you noticed! Track Page Views With. Auctiva’s FREE Counter. The item “WW2 officer US Army Air Force Corp leather D1 bomber jacket USAF DAKOTA QUEEN” is in sale since Monday, April 13, 2020. This item is in the category “Collectibles\Militaria\1919-38\Original Period Items”. The seller is “william_kramer” and is located in Naperville, Illinois. This item can be shipped worldwide.