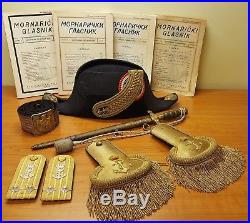 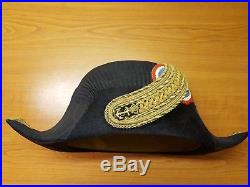 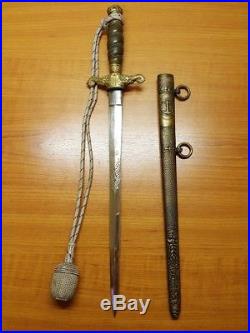 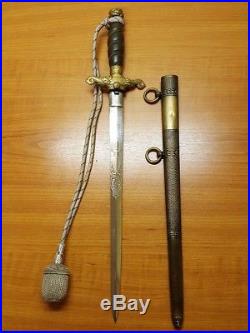 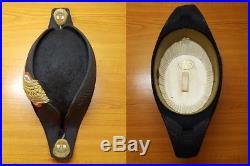 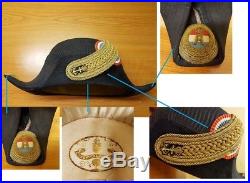 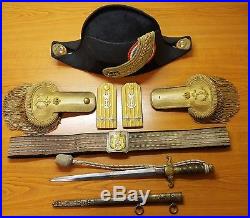 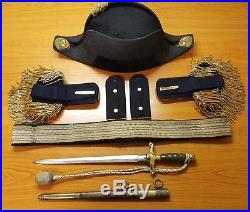 Aauthentic Kingdom of Yugoslavia High Officer Navy Lot. Hat, Dagger, Belt, Parad Epaulettes, Work Epaulettes + 4. Tems belonging to the High Officer of the Kingdom of Yugoslavia Navy, lot included. Hat : it is made of black felt, it consists of a hight of 120 mm high and a rim that hangs on the two opposite sides. The left hemisphere is 140 mm high and the right is 130. The circumference is covered with 70 mm wide black silk enlargement. The widths are equal to the enlargement of the labels. On the right side of the hat there is a braid somewhat bent backwards leading from the front of the rim towards the middle of the hat. The braid is made of gilded rope 45 mm wide. At the upper edge of the perimeter under the braid, there is a silk cockade in national colors, 80 mm in diameter. In each corner of the hat there is one round cockade in state colors, with a monogram King Aleksandar. Dagger : the handle of this dagger is with thin grooves into which is inserted a twisted brass wire. The pommel is made of brass in the form of a knot of rope. The crosspiece is made of brass, flat with the legs in the form of stylized dolphins. The arms are constructed so that the dolphins are facing each other and tails are bent worm down. In the middle of the sacrum from the rear, there is a button to unlatch the dagger from its sheath. The blade is decorated with etching with two elongated box with ornaments plant intertwined. On one side of the blade on the elongated mat of plants in the middle, there is the monogram of King Alexander I, the letter “A” framed by two laurel branches above which the monarchist crown. On the other hand the monarchical national emblem. The mandrel of the blade is bolted to the nipple a leaf spring in the form of teeth that engages the edge of the mouth covers. To dagger could put or removed from the sheath must be a knob on the sacrum the release. When the button is pressed on the sacrum, he remove the leaf spring with the tooth down and unlocked the dagger from its sheath. Belt (Escharpa) : from a silver cloth of 47 mm wide, it is concealed in three rows of trumpets (red, white, blue), each tricolor width of 9 mm. The basic middle color is 5 mm wide. Blue, white red furrows are vertical and separated by silvery clusters, which move along the width of the belt. On one end of the echearch there is a silver plate on which the golden sleeve of the Kingdom of Yugoslavia is established. The slab is slightly missed, the sides are 50 mm long and the corners are slightly hooked. The board is positioned so it can be shortened when needed. Belt is set in the color of the e. They consist of a handle, a field and a resin and are made of one piece. On the upper side are covered with golden fabric, and from the bottom are set with a black color. The handle is 60 mm wide and on the free side it is cut by angles of 14 mm. On the upper part of the handle there is a small navy button. One button is missing. The field is colored and has a large diameter of 102 mm and in a small 50 mm. It is made of three ropes, of which the inner bobbin and handle. The ropes are round and gold-plated, the middle is 13 mm wide and the outside 2 mm. The elopets are made to lay horizontally on the shoulders. The epaulettes are worn only with a redengine, they run under the golden petals, and they are attached by a single wand that runs through the two loops on the shoulders. In the middle of the field is located on the eupolets of the naval officers with a gold embroidered navy emblem consisting of anchor wrapped with a rope with the royal crown above it. Work epaulettes: are sewn in colored markings, so they approach two millimeters as a wrinkle, on the corners of the euphoria are slightly shaded, 10 mm from the upper end there is one small navy button. On eyelids, there are silver stars that designate ranks. Two stars are placed next to each other. At the top there is a small navy button. On the eyelids a mark of a mark is worn (the anchor is twisted with a rope and above it the royal crown). Navy Gazette : “MORNARIKI GLASNIK” from: 1934.,1936. The item “Kingdom of Yugoslavia High Officer Navy Lot Hat, Dagger, Belt, couple Epaulettes” is in sale since Tuesday, December 19, 2017. This item is in the category “Collectibles\Militaria\1919-38\Original Period Items”. The seller is “europatch15″ and is located in Zvornik. This item can be shipped worldwide.