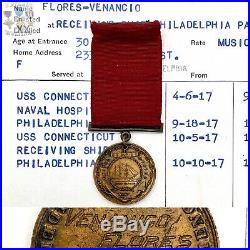 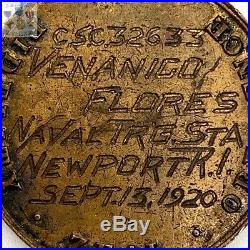 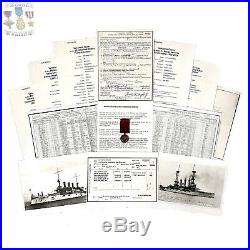 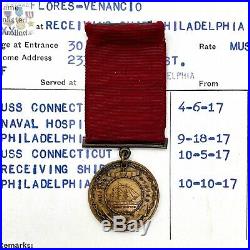 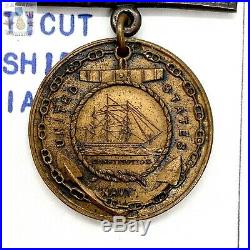 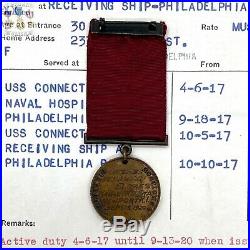 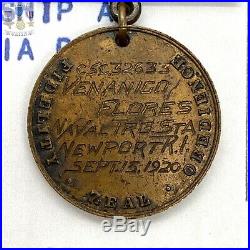 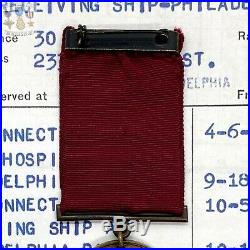 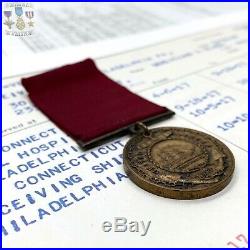 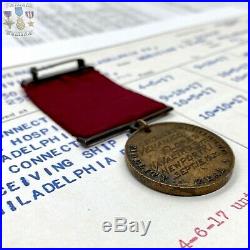 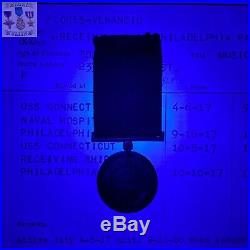 United States Navy Musician 1st Class 1st Musician Venancio Flores (service #150-97-07 & continuous service certificate #32633) was born September 1st 1886 in Subic, Zambales, Philippine Islands. Venancio enlisted in the Navy United States Navy as a immigrant on August 20th 1908 in Olongapo, Philippines. Seamen Venancio served aboard several early Battleships including the U. He also served many years at the Philadelphia Naval Yard. Musician 1st Class Flores was Honorable Discharged and issued this officially government engraved Good Conduct Medal. He was then transferred to inactive duty on September 13th 1920 at the Naval Training Station, Newport Rhode Island. M1C Flores was subsequently discharged from the Navy on September 22nd 1924. United States Navy Musician 1st Class 1st Musician Venancio Flores passed away in May 1968 in Philadelphia, Pennsylvania. ORIGINAL WORLD WAR I UNITED STATES NAVY GOOD CONDUCT MEDAL, W/ F ULL WRAP BROOCH. RIBBON DRAPE & BAR TESTED U. The Navy Good Conduct Medal is the oldest Good Conduct Medal, dating back to 26 April 1869. There have been a total of four versions of the Navy Good Conduct Medal, the first version of which was issued from 1870 to 1884. The original Navy Good Conduct Medal was also not worn on a uniform, but issued with discharge papers as a badge to present during reenlistment. A sailor in the Navy received a new Good Conduct Medal for each honorable enlistment completed. The second version of the Navy Good Conduct Medal was issued between 1880 and 1884. The medal was considered a “transitional decoration” and was the first of the Good Conduct Medals to be worn on a uniform. The medal was phased out by 1885 and a new medal issued between 1885 and 1961. The new medal was a Good Conduct medallion suspended from an all red ribbon. Enlistment bars, denoting each honorable enlistment completed, were pinned on the ribbon as attachments. There was slight oddity during the SpanishAmerican War when the Navy created the Specially Meritorious Service Medal which also had an all red suspension and service ribbon. There were recorded cases of Navy enlisted personnel who were awarded both the Good Conduct Medal and the Specially Meritorious Service Medal who wore two red service ribbons on their Navy service uniforms. This is one of the rare times in the history of U. Military awards that two awards had identical ribbons. Please let me know if there’s anything else I can do for you! The item “NAMED WWI 1920 US NAVY GOOD CONDUCT MEDAL VENANICO FLORES BATTLESHIP MUSICIAN” is in sale since Thursday, May 7, 2020. This item is in the category “Collectibles\Militaria\1919-38\Original Period Items”. The seller is “medal_mulisha_store” and is located in Los Angeles, California. This item can be shipped worldwide.