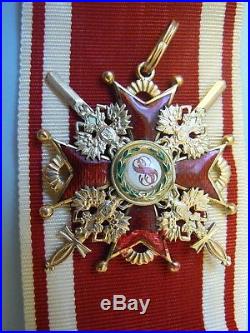 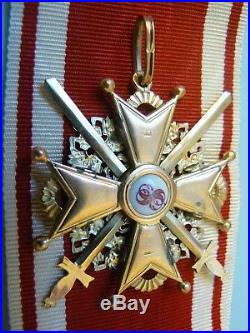 IMPERIAL RUSSIA ORDER OF ST. STANISLAUS, COMMANDER WITH SWORDS, (St Stanislaw) 2nd class , 45mm cross tip to tip, 56mm swords tip to tip, GOLD medal, cross, makers hallmarks on suspension ring and reverse, superb enamels, very rare. Established first by the Kingdom of Poland. After the Partition by the three world powers in 1795, the Czar nationalized it as a Russia Order of the White Eagle as well as The Order of the Virtuti Militiari in 1831. St Stanislaw is the national saint of Poland. His body is entombed in a silver casket on top of the alter at the Wawel Castle Cathedral in Krakow. A most beautiful work of art. The Russians gave out thousands of the civilian version of this order and they are available on the market for its gold content, however the Polish version has not been seen for sale for over fifty years in any class. Please also note that this military version is very rare because it was awarded for distinguished military service and NOT for making a donation to a charitable organization as per the civilian version without swords. The free listing tool. The item “RUSSIA IMPERIAL ORDER ST. STANISLAUS COMMANDER, WITH SWORDS, gold, hallmarked, rare” is in sale since Saturday, November 24, 2018. This item is in the category “Collectibles\Militaria\1919-38\Original Period Items”. The seller is “polishmilitaria” and is located in Fort Lauderdale, Florida. This item can be shipped worldwide.