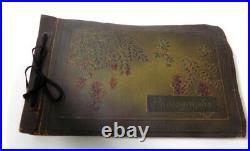 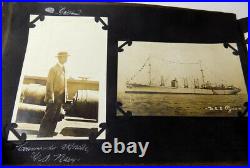 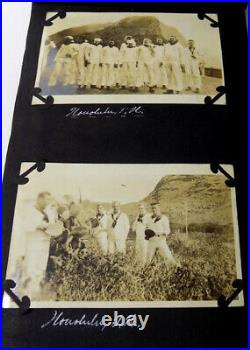 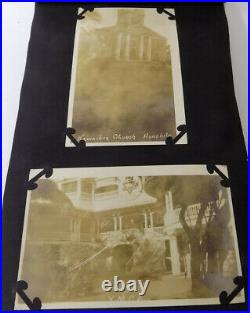 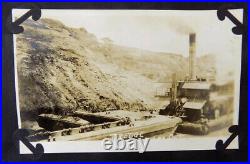 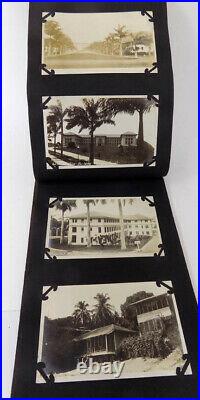 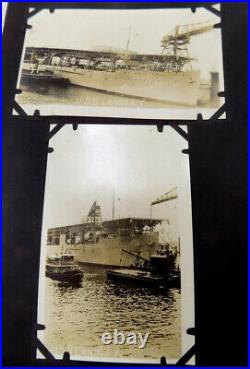 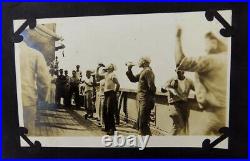 This is a US sailor’s photo album with 109 real photo postcards. The first 2 photos are of Captain F. Naile and the USS Pyro. I learned that a Frederick Raymond Naile served on the USS Pyro from 1922 until 1924. The postcards all have the Azo stampbox on the back which dates from 1918 to 1930. A few of the photos have brief descriptions written under them, and some have handwritten titles that are part of the photo. There is no name for the sailor who compiled the album or details of his service. Some of the cards may have been commercially published, but many looks like they were made from original photos taken by the sailor. There are also 2 cards from Alcatraz, one of the Philadelphia Naval Yard, the Chapel at West Point and an observation balloon. I’ve taken out of the album and listed separately album pages with photos of the 1923 Honda Point California disaster where 7 Navy destroyers were wrecked and some photos and rppc’s of San Diego. She was decommissioned in 1924 and recommissioned in 1939 – she was one of the ships which survived the attack at Pearl Harbor. There are 2 other photos identified by the sailor as taken on the Pyro – one of the deck, and a very faded photo of the 2 dog mascots. The Panama Canal cards include the Gatun Locks, Emergency Locks, Pedro Miguel, Miraflores Gates, Culebra Cut and the Pacific entrance. Other Panama cards include the Taboga Island, Pearl Islands, El Vigia Village, ruins left by pirate Henry Morgan in 1671, Canal Administration building, hospital and the Leper Colony. I’m not sure if the sailor was stationed in Panama or if he just went through the canal going from the West to East Coast. The cards vary in quality – some are very sharp and clear, a few are blurry, and others very pale. The black paper tabs have stuck to the cards. I was able to remove them from several cards that I took out of the album, but it’s a tedious job that left slight traces of black behind. Several of the cards are apart from the page. The item “1920’s US Sailor’s Photo Album 109 Real Photo PC’s Panama Canal, Hawaii, Ships” is in sale since Saturday, March 23, 2019. This item is in the category “Collectibles\Militaria\1919-38\Original Period Items”. The seller is “forestseeker” and is located in Advance, North Carolina. This item can be shipped worldwide.