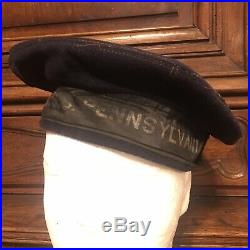 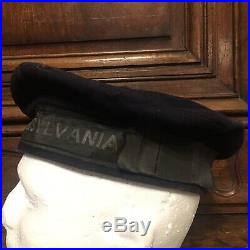 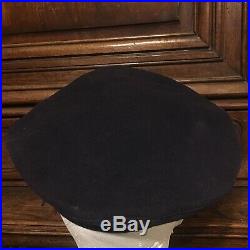 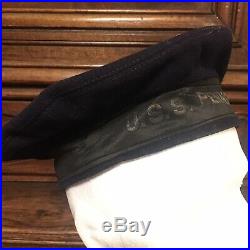 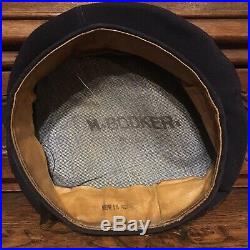 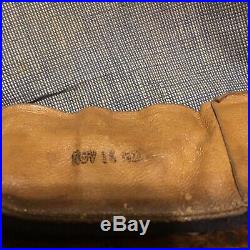 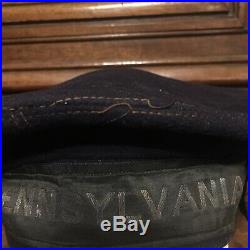 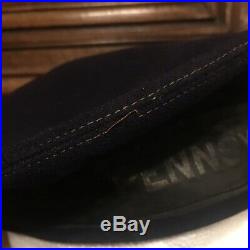 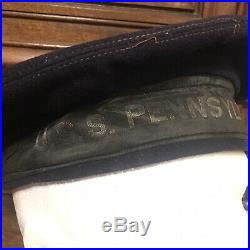 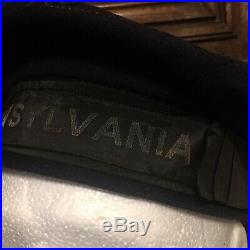 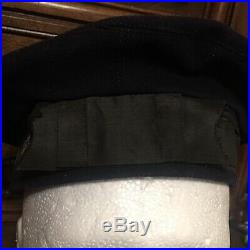 Rare Pre WWII USS Pennsylvania BB-38 Battleship sailers wool crackerjack Donald Duck Flat Hat Navy Cap Pre-1933. Excellent vintage condition nearly antique wool sailers cap with USS PENNSYLVANIA in gilt wire across the sweat band. Own a piece of history from the heyday of the Old grey Lady when she was the flagship of the US Naval Fleet. Very good condition wool in great shape leather sweat band in great shape with a date stamp picture included. A few loose stitches. Gilt/gold wire is tarnished but in very good condition. Name stenciled in side M. Hat is creased from storage Ive had it on the head mold for a week or so to help but likely stored for a long time. The Pennsylvania-class consisted of two super-dreadnought battleships built for the United States Navy just before the First World War. The ships were named Pennsylvania and Arizona, after the American states of the same names. They constituted the United States’ second battleship design to adhere to the “all or nothing” armor scheme, and were the newest American capital ships when the United States entered the First World War. During the 1920s and 1930s, Pennsylvania served as the flagship of first the Atlantic Fleet, and after it was merged with the Pacific Fleet in 1921, the Battle Fleet. Pennsylvania was occupied with a peacetime routine of training exercises (including the annual Fleet problems), port visits, and foreign cruises, including a visit to Australia in 1925. She suffered relatively minor damage in the attack, being protected from torpedoes by the drydock. Pennsylvania joined the fleet in a series of amphibious operations, primarily tasked with providing gunfire support. The first of these, the Aleutian Islands Campaign, took place in mid-1943, and was followed by an attack on Makin later that year. During 1944, she supported the landings on Kwajalein and Eniwetok in the Marshall Islands and the Mariana and Palau Islands campaign, including the Battles of Saipan, Guam, Peleliu, and Battle of Angaur. During the Battle of Okinawa, she was torpedoed by a Japanese torpedo bomber and badly damaged, forcing her to withdraw for repairs days before the end of the war. Allocated to the target fleet for the Operation Crossroads nuclear tests in 1946, Pennsylvania was repaired only enough to allow her to make the voyage to the test site, Bikini Atoll. She survived both blasts, but was badly contaminated with radioactive fallout from the second test, and so was towed to Kwajalein, where she was studied for the next year and a half. The item “Rare Pre WWII USS Pennsylvania Battleship Donald Duck Flat Hat Navy Cap Pre-1933″ is in sale since Tuesday, August 27, 2019. This item is in the category “Collectibles\Militaria\1919-38\Original Period Items”. The seller is “dusty_irene” and is located in Lacrosse, Washington. This item can be shipped to United States, Canada, United Kingdom, Denmark, Romania, Slovakia, Bulgaria, Czech republic, Finland, Hungary, Latvia, Lithuania, Malta, Estonia, Australia, Greece, Portugal, Cyprus, Slovenia, Japan, China, Sweden, South Korea, Indonesia, Taiwan, South africa, Thailand, Belgium, France, Hong Kong, Ireland, Netherlands, Poland, Spain, Italy, Germany, Austria, Bahamas, Israel, Mexico, New Zealand, Singapore, Switzerland, Norway, Saudi arabia, Ukraine, United arab emirates, Qatar, Kuwait, Bahrain, Croatia, Malaysia, Chile, Colombia, Costa rica, Panama, Trinidad and tobago, Guatemala, Honduras, Jamaica, Brunei darussalam, Iceland, Luxembourg, Paraguay, Uruguay.