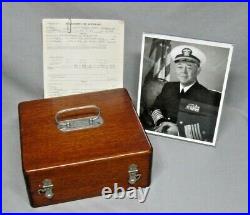 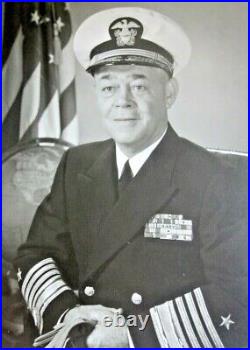 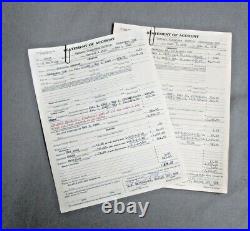 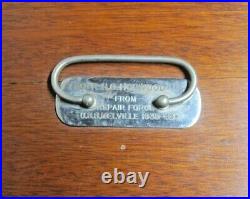 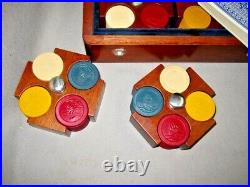 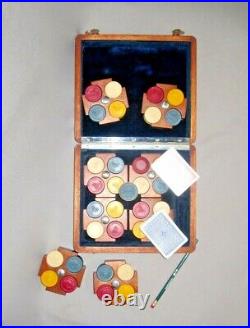 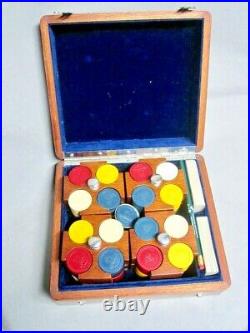 PRESENTATION Poker Chip Set. The poker chip/ card presentation box was part of the Admiral Herbert Gladstone Hopwood Archive. Feeling that there was too much material for one group, I have divided up certain items making it possible for more collectors to have a piece or two at more affordable prices. Admiral Hopwood was born November 23, 1898 in Mt. He attended public schools in Shamokin, Pa and made it his home of record. He was a U. Naval Academy graduate Class of 1919. While a midshipman, he served on active duty during WWI with the Atlantic Fleet, later graduating and commissioned Ensign. From 1919 to 1925 Admiral Hopwood served on the USS America, USS Florida, and USS Hopkins, the served in the Department of Ordnance and Gunnery at Annapolis. Returning to sea duty in 1927, he was assigned to the Asiatic Station on the USS Hart until March of 1930, then transferred to USS Ramapo. Returning to the States in 1930, Hopwood was assigned as Aide to Commandant of Fourth Naval District, Philadelphia, until August of 1932. His next duty was in connection with fitting out the USS Indianapolis, and served on the Cruiser as communication officer from Dec. Of 1932 until June 1934. Hopwood was then detached from the USS Indianapolis to become the aide and flag lieutenant on the staff of Rear Admiral Arthur J. Hepburn, commander, Destroyers, Battle Force, Flagship USS Detroit. He remained in that position until assuming the command of the Scouting Force, Pacific Fleet, hoisting his flag on the USS Indianapolis. In 1936, Admiral Hopwood was assigned to the Planning Division of the Bureau of Navigation, Navy Department, Washington, D. (later re-designated Bureau of Naval Personnel). Returning to sea duty in 1938 he assumed command of the USS Mahan, serving there until June 1939. He was transferred to the USS Melville as executive officer until mid 1940. Returning to Washington, he was once again with the Bureau of Naval Personnel (as of 1942). During this assignment he served in the Records Section and in the Central Division, later becoming Director of the latter. 1942 he was assigned additional duty as a member of the Joint Staff Planners. His citation for Legion of Merit reads. Gold Star in lieu of the second Legion of Merit. For exceptional meritorious conduct in the performance of outstanding services to the Government of the United States as Commanding Officer of the USS Cleveland during operations against Japanese forces in the Southwest Pacific Area, from August 14, 1944, to July 3, 1945. A brilliant leader, Captain Hopwood assured the precise execution of each important assignment and, by his alert and cool command of the CLEVELAND, contributed immeasurably to the success of many Allied campaigns in a vital theater of war. His expert seammanship, resolute determination and unwavering devotion to duty reflect the highest credit upon himself and the United States Naval Service. Admireal Hopwood reported on August 13, 1945 for duty as Assistant Chief of the Bureau of Naval Personnel, Washington. In January 1946 he was ordered to duty as Assistant Chief of Naval Operation (Personnel) Navy Department, and assigned additional duty as a member of the Navy Board Formulating Post-War Policy on Promotion and Retirement of Officers. On July 30, 1946, Rear Admiral Hopwood was nominated by the Senate of the US to be Director of Budget and Reports in the Department of the Navy, with the rank of Rear Admiral, for a term of three years. On August 9, 1949, he was reassigned to that post for an additional three-year period. Hopwood received his third star becoming Vice Admiral in 1955 as Commander of the First Fleet; and Deputy Chief of Naval Operations (logistics) from 1957 to 1958. On 1 February, 1958, he was awarded his fourth star and became Commander In Chief of the U. He would hold that command until his retirement from active duty on August 31, 1960, and awarded the Navy Distinguished Service Medal. Admiral Hopwood served in the Navy for 44 years. He past away at the age of 66, in September of 1966. Although Admiral (then commander) Hopwood’s time onboard the USS Melville Was short, he did receive this great Presentation cased poker chip/ card set. The size of this walnut/ blue velvet lined box is 9 x 10.5 x 4.5 high. It is filled with 8 individual trays of chips, two decks of cards. A bronze bell had found its way into the set at some point, it holding several small green chips. A few documents relating to Hopwood’s pay are included while serving on Melville, along with a press 8×10 photo of the Admiral taken during his command as CINCPACFLT. The USS Melville AD-2 was a destroyer tender commission on 3 Dec. She saw service in both world wars. Condition of the items in this lot are fine+. Track Page Views With. This item is in the category “Collectibles\Militaria\1919-38\Original Period Items”. The seller is “jimmtn” and is located in this country: US. This item can be shipped to United States, Canada, United Kingdom, Denmark, Romania, Slovakia, Bulgaria, Czech Republic, Finland, Hungary, Latvia, Lithuania, Malta, Estonia, Australia, Greece, Portugal, Cyprus, Slovenia, Japan, China, Sweden, South Korea, Indonesia, Taiwan, South Africa, Belgium, France, Ireland, Netherlands, Poland, Spain, Italy, Germany, Austria, Bahamas, Israel, Mexico, New Zealand, Philippines, Singapore, Switzerland, Norway, Saudi Arabia, United Arab Emirates, Qatar, Kuwait, Bahrain, Republic of Croatia, Malaysia, Chile, Colombia, Costa Rica, Panama, Trinidad and Tobago, Guatemala, Honduras, Jamaica, Antigua and Barbuda, Aruba, Belize, Dominica, Grenada, Saint Kitts-Nevis, Saint Lucia, Montserrat, Turks and Caicos Islands, Barbados, Bangladesh, Bermuda, Brunei Darussalam, Bolivia, Egypt, French Guiana, Guernsey, Gibraltar, Guadeloupe, Iceland, Jersey, Jordan, Cambodia, Cayman Islands, Liechtenstein, Sri Lanka, Luxembourg, Monaco, Macau, Martinique, Maldives, Nicaragua, Oman, Pakistan, Paraguay, Reunion.