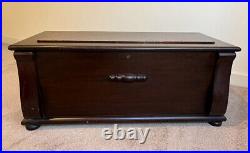 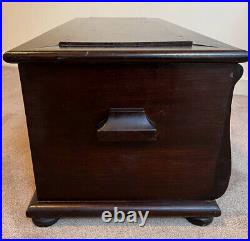 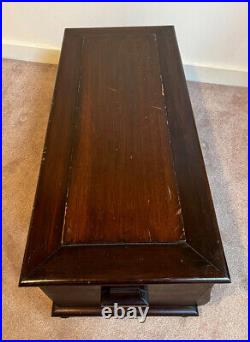 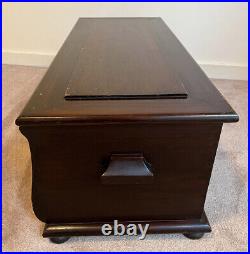 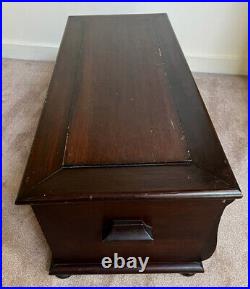 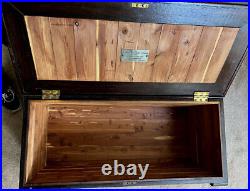 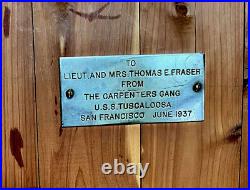 Navy Presentation Sea Chest. Empire-style cedar lined sea chest, presented in 1937 to decorated U. Naval officer Thomas Edward Fraser Feb. 6, 1901 – March 15, 1942. Inscription on metal plaque. FRASER FROM THE CARPENTERS GANG, U. TUSCALOOSA, SAN FRANCISCO, JUNE, 1937. Fraser served on the USS Wyoming, USS Worden, USS Ellis and at the New York Navy Yard. Ssigned to the USS Tuscaloosa (CA 37) in 1934, where he served until assignments to the Philadelphia and Portsmouth Navy Yards in the late 1930’s. During 1940 and 1941 he briefly commanded destroyers USS Yarnall, USS Claxton and USS Broome. 10, 1941 he became the commanding officer of the USS Walke. 20, 1942 he was appointed to the temporary rank of commander. USS Walke was sunk on Nov. 15, 1942, Battle of Salvo Island, Guadalcanal Campaign. Commander Fraser was lost during the battle. He was posthumously awarded the Navy Cross for his valor and devotion to duty. The President of the United States of America takes pride in presenting the Navy Cross (Posthumously) to Commander Thomas Edward Fraser (NSN: 0-58890), United States Navy, for extraordinary heroism and distinguished service in the line of his profession as Commanding Officer of the Destroyer U. WALKE (DD-416), and Acting Division Commander of the destroyers in the task force during an engagement with Japanese naval forces near Savo Island on the night of 14 – 15 November 1942. His inspiring leadership and the valiant devotion to duty of his command contributed in large measure to the outstanding success of these vital missions and reflect great credit upon the United States Naval Service. General Orders: Bureau of Naval Personnel Information Bulletin No. Height to top of raised panel:16 1/2. Condition: Some surface wear. Small piece missing from the back of the right front foot. The chest came from a home in York, Maine, just north of the Portsmouth – Kittery Navy Yard. Fraser was stationed at the Portsmouth Navy Yard after serving on the USS Tuscaloosa, and before being assigned to the USS Yarnall in 1940. A one-of-a-kind, decorated World War II officer’s presentation sea chest! Please see our 20 photos below. There are reflections in some of my images. This item is in the category “Collectibles\Militaria\1919-38\Original Period Items”. The seller is “nightowlcafe” and is located in this country: US. This item can be shipped to United States.