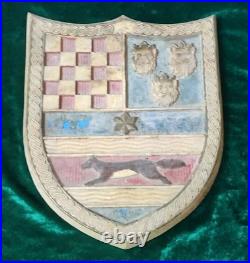 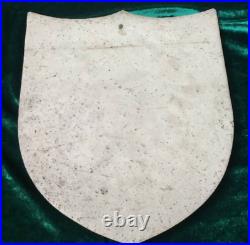 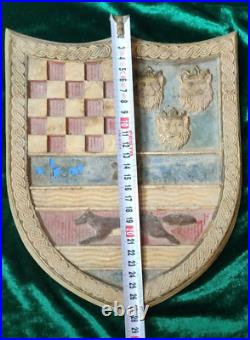 The State of Slovenes, Croats and Serbs Serbo-Croatian:Drzava Slovenaca, Hrvata i Srba /?????? Slovene:Drzava Slovencev, Hrvatov in Srbov was a political entity that was constitutedin October 1918, at the end of World War I, by Slovenes, Croats and Serbsresiding in what were the southernmost parts of the Austro-Hungarian Empire. Although internationally unrecognised, this was the first incarnation of aYugoslav state founded on the Pan-Slavic ideology. Thirty-three days afterit was proclaimed, the state joined the Kingdom of Montenegro and Kingdom ofSerbia to form the Kingdom of Serbs, Croats and Slovenes. ORIGINAL PERIOD COMPOSITE MATERIAL COAT OF ARMS. VERY RARE DUE TO State of Slovenes, Croats and Serbs ONLY EXISTED ABOUT 12 MONTHS. MUSEUM QUALITY CROATIAN HISTORICAL ERA ARTEFACT. SOME COLOR PEAL AS CAN BE SEEN ON PICTURES. HEAVY PATINA AND SOME DUST ON FRONT. VISIBLE BLACK DOTS ON THE BACK DUE TO TIME AND ELEMENTS IT WAS EXPOSED TO. MADE OF SOME KIND OF COMPOSITE GYPSUM? IMPREGNATED WITH SOME KIND OF RESIN MATERIAL. SEE MY OTHER ITEMS. This item is in the category “Collectibles\Militaria\WW II (1939-45)\Original Period Items\Other WWII Original Items”. The seller is “superbpraktik” and is located in this country: HR. This item can be shipped worldwide.