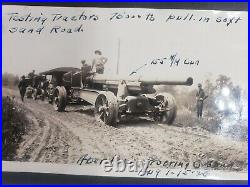 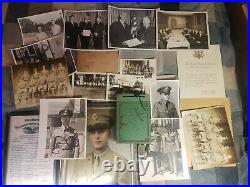 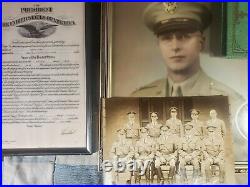 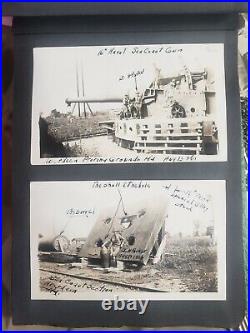 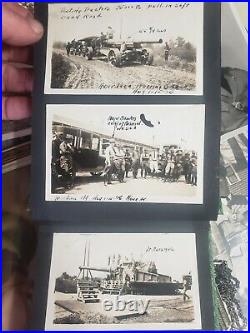 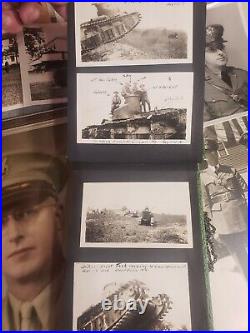 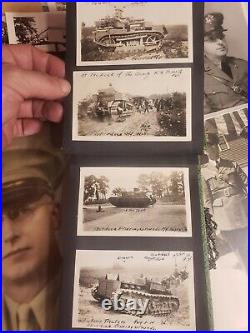 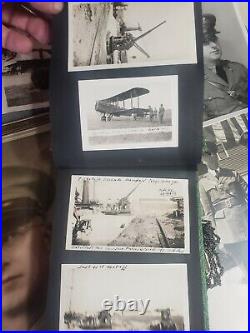 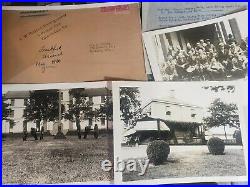 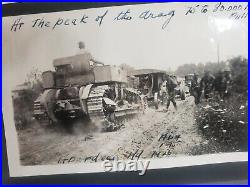 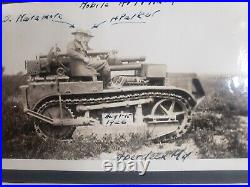 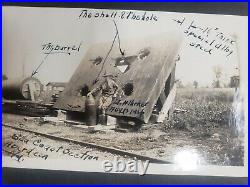 Ok so this is a complete lot of items from an officers personal items that range from 1926 up to 1960s. The United States Army Officer this all belonged to was named Harry Parker from Stratford Conn. The prized piece of this collection is his personal photo album of his August 1st-15th 1926 training and testing of military equipment at the Aberdeen Proving Grounds Maryland. Each photo has details written of what they were doing and usually a few people identified. After WW1 the U. Had to up there Military equipment game and these tests were to try out and test the equipment being developed, and those tests also were used for procurement contracts for the Military. Capt Parker worked all his life in the Ordinance Dept of the U. Army and in 1940 was appointed. Of The Ordinance Department U. Army by the War Office as shown by the official paperwork with War Office embossed seal in this collection. The photo album has 34 photos from Aberdeen that measure 2 3/4 x 4 5/8 inches and show the grounds, barracks inside and out, his group of 5 officers labeled as the 5 Hirams with all identified, 16″ seacoast gun, the shell and damage to a 16″ thick special alloy steel, testing tractors pulling 75,000 pounds (155 mm gun) on sand, a group shot of men with Major Brookes Chief of Arsenal Ordinance U. 2 more photos of 16 naval gun, 6 ton tank testing side slippage on hill test, 5 officers on top of 6 ton tank with beat up track, small convoy of tractors testing pulling, 6 ton tank showing critical point of angle on a bank when making gun emplacement, small mobile artillery tractor, at the peak of the drag showing a large. Pulling in reverse a truck with 155mm gun and one more vehicle making an 75to 80,000 pound pull, another 6 ton tank photo, another tractor test with a Bomb Sled tractor pulling a 155mm gun up a bank, a photo of the first German tank made that had been captured in WW1, photo of camp of officers assembled in the field by what looks like rail mounted gun, trench mortar test, 2 photos showing anti aircraft gun fixed position, 1 photo showing firing anti-aircraft gun and note that reads 7 shots in 21 seconds 19,000 yards and then a blurred picture that reads just as it went off (showing effects of the blast force and holding camera still), then a photo of an amazing military bi-plane and 3. Views from his ride in it, photo of 2 officers with rifle and. Grenade launching adapter, a photo of a bunch of men and officers watching as a half track jeep style buggy is stuck in a shell hole and trying to get out, photo of a 8 rail gun in action just as it fired with a range of 30,000 yds at 150 elevation 250lb slug and 50lb tnt, photo going into a DugOut, and then 14 more are from West Point in 1927, and 1 with many officers in front of a building with massive columns, and finally 4 more photos of him in uniform with his daughters and mother and just him all taken beside his automobile those same years. Along with the album are his original Dog Tags, framed original 1940 War Dept appointment to Captain of. Army, Large hand colored 1920s military photograph (15 1/4″x 12 1/2″), 1928 original 8×10 sepia photo in orig envelope of 9 Ordinance officers and another man in suit H. Parker is in center back row, letter from President Nixon honoring memory of Harry Parker when he died, an envelope dated 1930 with stamp that L. Holland photographer and pen that reads Frankford Arsenal May 1930 that has 3 photos 6 3/4″ by 5″ with 2 photos showing the main buildings and one with many officers on the steps which has a paper that identifies most of the men including himself, 2 8×10 photos from 1936 of him golfing and relaxing in PA. The 2 1962 award press photos 8×10 inches, an old 8×10 silver gelatin photo on heavy stock of Mr. Parker at a fancy dinner with many other suits, 1946 proof photo of him in uniform with envelope (5×7), 2 more thick stock paper photos (8×10) of him with another officer and then blown up to show just him. If I come across any more of his items I will update the listing with them. Even after his retirement from service he served as a contract administrator in the. Activity as known by the two 8×10 photos from and award he got when retiring completely in 1962. Fantastic collection with some rare and amazing proving ground photos!!! This item is in the category “Collectibles\Militaria\WW I (1914-18)\Original Period Items\United States\Photographs”. The seller is “from*here*to*eternity” and is located in this country: US. This item can be shipped to United States, Canada.