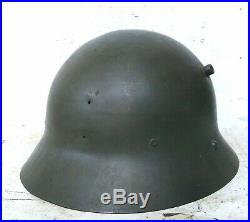 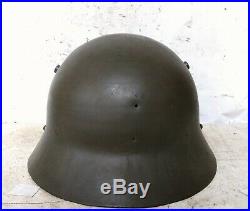 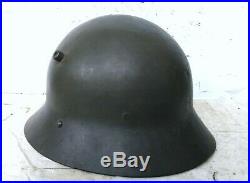 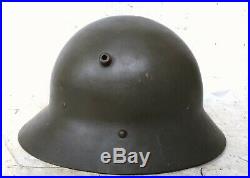 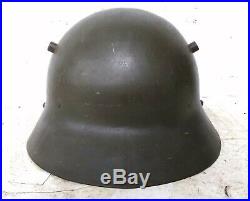 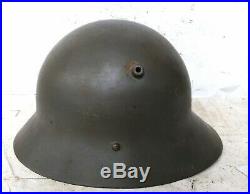 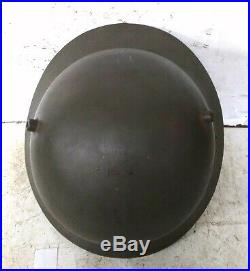 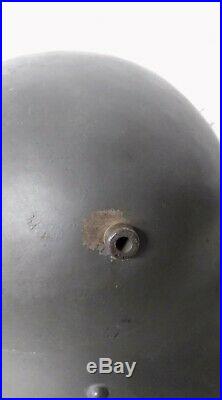 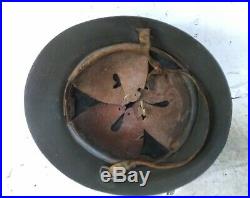 Czech model 1930 combat helmet, issued and used during the Spanish civil war. Nice example of a scarce helmet. These were initially developped for the Czech military, but not witheld as the final choice. They were mainly exported to Spain, Ethiopia and the Netherlands!!! And saw extensive use during the Spanish civil war. Shell has no dings, cracks or holes. Two typical Austro-Hungarian vent lugs, one on each side. It has a smooth green-greyish paint. “Front” has two tiny holes punched in, to accomodate an insigna. It’s never really clear how the Spanish wore these.. Bigger visor in front, or in the back.. And depended mostly on whomever got it issued. The liner is the standard Spanish 3-pad leather one. Consisting of 3 leather parts fixed on a leather liner band, wich is rivetted to the shell. The chinstrap is some kind of replacement from the civil war… They used whatever they could lay their hands on. A great addition to any collection! Trough the European Union aswell. The item “Czech m30 Experimental helmet, Spanish Civil War issued, complete RARE” is in sale since Sunday, September 13, 2020. This item is in the category “Collectibles\Militaria\1919-38\Original Period Items”. The seller is “flakone” and is located in Jette. This item can be shipped worldwide.