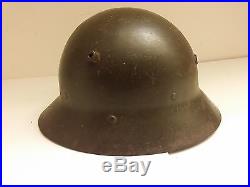 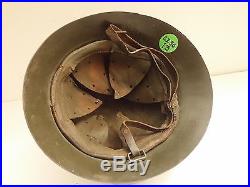 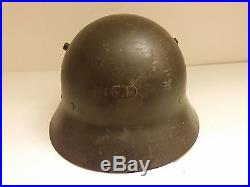 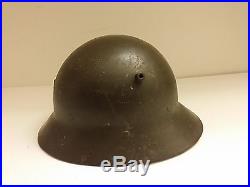 Czech M30 Spanish Civil War. Helmet of Franco’s Nationalists. This is a real good example of a Czech Model 1930. These were made almost exclusively for export. I know some of these went to Africa as I have seen a picture of an Ethiopian soldier in the custody of Italians and he was wearing one. The majority of them went to the Spanish Republic. This particular helmet is one that was captured by Franco’s fascist forces and used on the Nationalist side. Material shortages on both side made the re-issuing of the enemy’s equipment pretty much common practice. She’s been repainted only one time and has been re-linered. Odd thing is, is that the liner is a Spanish copy of the original Czech one. Flat Spanish rivets hold it place. It’s also got a Spanish chinstrap. The badge bracket on the front tells us proof positive that she’s been “Frankanized”. She’s coming right out of my personal collection. I’m thinning the herd, getting ready to move, so here’s a list of some other helmets that are in my store. Check them out if you’re interested. Swiss M18/40/51 with camo cover. Czech Export M30 Spanish Civil War Republic helmet with Czech liner and Chinstrap. Czech Export M30 Spanish Civil War Nationalistic helmet with Spanish made Czech liner and Spanish Chinstrap. French M26 Export SCW. French M26 Domestic SCW. Spanish M26 Republic SCW Con-ala. Belgian Army M51 M1. Russian M36 SCW Russian Liner Spanish Chinstrap. German M35 SCW Franco Re-furb. Romanian M39 Dutch M34 Shell. This is a good example of a. This one is coming right out of my personal collection. The free listing tool. The item “A2 Czech M30 Spanish Civil War Franco Helmet of the Fascist Nationals” is in sale since Friday, June 24, 2016. This item is in the category “Collectibles\Militaria\1919-38\Original Period Items”. The seller is “rev.hottubfreddy” and is located in Virginia Beach, Virginia. This item can be shipped worldwide.